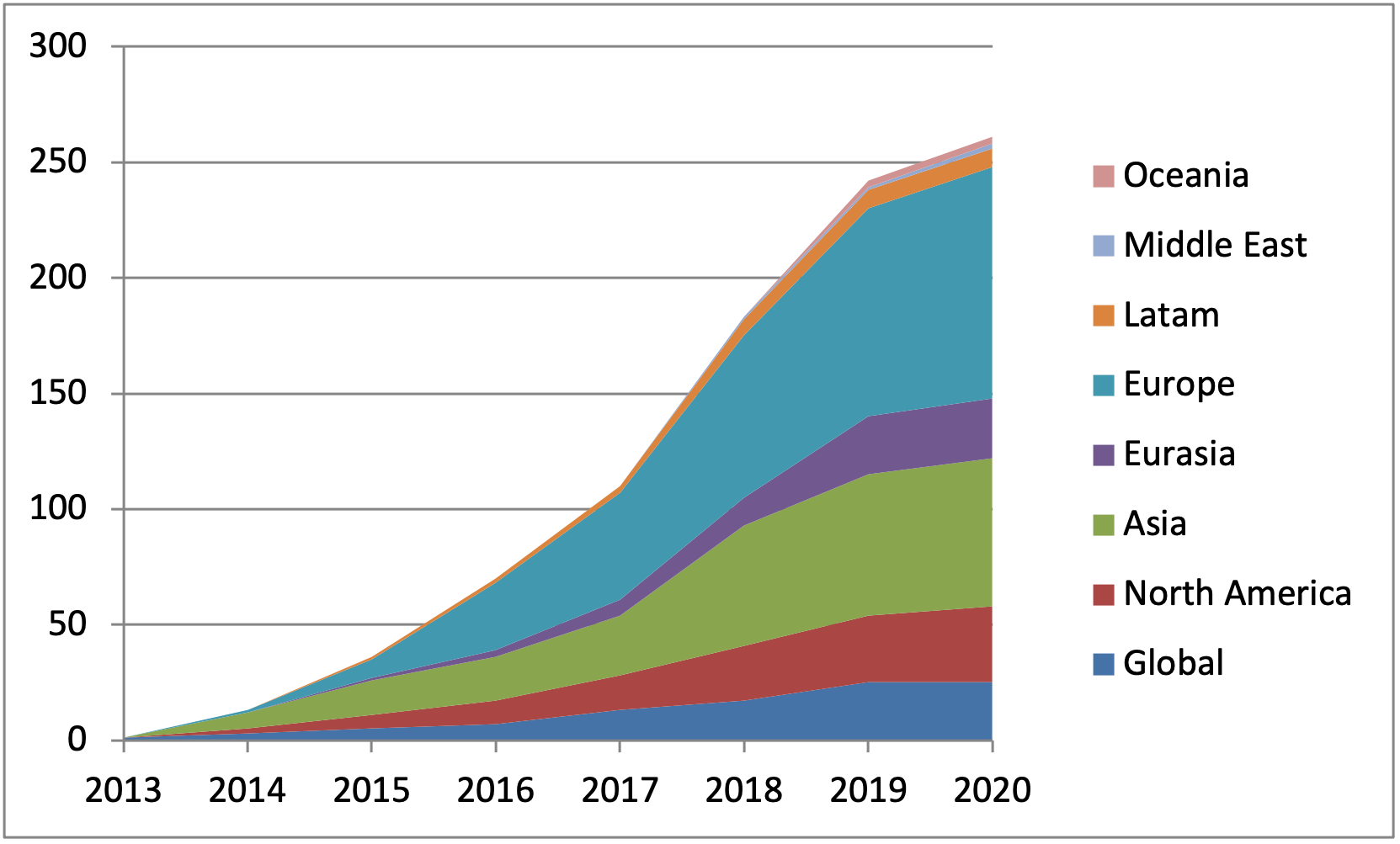 When we look at how the number of Ultra HD services in the tracker has evolved, a few things stand out. First of all, it’s easy to see that after several years of a steep rise in services, in 2020, the growth has slowed. We can only speculate about the reasons. At first, one might think the number of services is leveling off, reaching a plateau because the market may be saturated. That’s not that likely, however. Although it’s questionable whether all TV and VoD services over time will migrate to Ultra HD, the current number is still very modest, below 1% of all services. It’s most likely that the development in 2020 simply slowed down due to the global Covid19 pandemic, making it more challenging to develop and launch new services. It’s expected that after 2021, or perhaps already during this year, the speed will pick up again.

Secondly, it’s evident that most services are linear, with fewer VoD services (though not necessarily in terms of reach or subscribers, but more about that later), and there are far more B2C than B2B services. Intuitively this feels right because a B2B service can offer its content to many B2C services. Furthermore, many of the B2C companies are operators of cable or IPTV networks, which always serve a national market at best.

The growth has been steepest in 2018 and 2019. The first service in the tracker has been YouTube, launching 4K content on a modest but global scale as early as 2013. More global players followed in 2014, and they are among the most successful platforms today in terms of reach – Netflix and Amazon Video.

In 2014, Asia saw the launch of no fewer than seven B2C services. A detail you can’t see from these charts is that all seven of them were from South Korea. An industry-wide push launch Ultra HD services across all distribution channels – terrestrial (KBS UHD1 and MBC), DTH satellite (KT Skylife), cable (UMAX), and IPTV (KT Olleh TV UHD and SK Broadband’s B TV). No doubt, the presence of two of the world’s biggest TV makers in the country has helped this market be an early adopter. What’s perhaps remarkable then is that by now, HDR content services have barely emerged in Korea.

The European industry has developed well, with a significant number of local players serving national markets. Eurasia, which covers mainly Russia, other former Soviet republics, and Turkey, has spawned a modest number of services, but they cover a wide geographic area with a sizable population.

The Asian market also contributes a large number of services, but we must add a caveat here. An Ultra HD TV channel like Japan’s Cable 4K – a B2B service offered to B2C cable operators – currently serves its content to 75 cable operators throughout Japan. The tracker does not count these individually, so the actual number of different commercial services is significantly higher.

North America has relatively few players, but the territory counts very few countries so that the active operators can address large markets. Understandably, the markets in Africa, the Middle East, Latin America, and parts of Asia are yet to develop. To be continued.