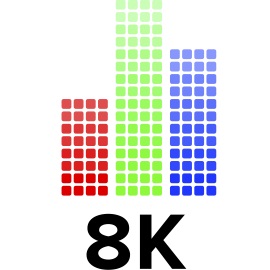 8K specifies only a resolution, so as far as the UHD Forum is concerned, it is just another value for the resolution parameter of UHD – just like Frame Rate, which, for example, can be 50, 60, 100 or 120. Furthermore, 8K is already clearly defined within ITU-R’s UHD-2 specification. In these early 8K days it’s worth reminding ourselves that NHK has been transmitting commercially since the end of 2018 and we can expect plenty of 8K buzz around the Tokyo 2020 Olympics that NHK will capture in 8K.

But the market is already awakening to 8K, and an 8K association has just been created to promote the new 8K format.

The Forum acknowledges 8K development as a promising future technology and plans to work on its inclusion within future versions of the Guidelines. UHDF president Thierry Fautier stated, “8K is not at the same state of maturity as 4K, and not widely deployable without further development and advances in the ecosystem. Our immediate interest is in 4K and HD resolution-based services and technologies, but the Forum continues to monitor the development of 8K video as it may relate to television production and distribution, including leveraging 8K production and display technologies within a 4K distribution system. We will update media and analysts on the booth at NAB Show.”

Our foundation UHD services have included HDR since 2016. Even so, as this is being written, there are barely over a dozen active services across the world that implement HDR. Despite the noted enthusiasm, we still need time for our foundation technologies to spread.

Our Guidelines do not list 8K as a foundation technology.8K is not yet even part of our additional technology layer.

There was an initial industry consensus as far back as 2012 that the first wave of UHD deployments would be based mainly on bringing the resolution for 2K (HD) to 4K. From about 2014 voices in the industry started saying that it would be HDR, not 4K that would bring forward the next generation of video experience.

The Ultra HD Forum formalized what UHD was in 2015, using five pillars. Resolution (4K), Refresh rate (HFR), Wide Color Gamut (WCG), High Dynamic Range (HDR) and Next Gen Audio (NGA). After some debate, we accepted the 2K (or HD) resolution would be enough to qualify as UHD as long as it used HDR. Even then, the resolution was just another parameter, and so 8K adds another value.

Looking at additional UHD technologies, beyond the foundation layer A.K.A. UHD-2, we have to consider the entire ecosystem: production, distribution, decoding, and display.

On the production side, 8K has already been available for a few years, and even beyond NHK, there is plenty of 8K being shot. Experimentation is still underway as there are still bottlenecks to handle to volume of raw data.

On the live distribution side, we can only use hardware-based encoders for now due to complexity and footprint constraints, and the codec currently used is HEVC Main 10 level 6.0, which isn’t efficient enough. Encoding companies can today provide live UHD-1 ABR in the Cloud, and we expect the jump to UHD-2 to be possible as soon as a real market opens up. In Japan, NHK’s service uses HEVC and with streams of 100M/s. Without entering the codec wars, it’s a relatively safe assumption that the next generation MPEG VVC codec will be 50% more efficient than HEVC, and it will be available in 2020 as an MPEG standard. We expect the first carrier-grade VVC encoding and decoding products in 2022. The complexity of such systems will be 4-8 times greater than today’s technology, which requires a new economic model to justify the investments.

We expect that the required decoder devices will need at least two new generations of silicon to be cost-effective, that too will bring us in about 2022. On the display side, studies have shown that the increased resolution will again require closer proximity to the screen. So, with a 75” TV, the user should sit at 1.5m.

But what lessons have we learned from current UHD deployments? First, the early TVs were deployed with the wrong specification (such as 2160p30 with BT 709 color space) and quickly became legacy devices blocking the development of new services. Second, we realized that we needed to have consensus in the industry for things to move and create a healthy ecosystem. DVB established a “beyond 4K” study mission, and we look at their recommendations expected by IBC’19.

On the production side, we already see that capturing in UHD-2 format improves UHD-1 production flexibility (pan & scan on the production side). This will be demonstrated on the Ultra HD Forum booth at NAB 2019 on booth xxx in the Futures Zone, courtesy Harmonic for the 8K production. We also see new applications where operators want to send an 8K field of View video and let the user equipped with a UHD-1 device navigate in the content (pan & scan on device side). We also see a need to capture with synchronized multi-UHD-1 cameras to produce a free viewport experience, but this will always send a UHD-1 view. There are many applications where UHD-2 production will feed UHD-1 capable networks, and this transition is what we believe the market should focus on until UHD-2 transmission becomes a reality.

On the display side, we can imagine a UHD-2 TV that will place the UHD-1 window augmented with other video or graphics, or as shown until now by upsampling the UHD-1 video to the UHD-2 format.

The Ultra HD Forum created its Guidelines with a base layer that is deployed by a few operators and an enhanced layer specification that we expect to be implemented in the coming years. So, the Ultra HD Forum recommends that the industry focuses on added value services described in the enhancement part of its Guidelines such as HDR with dynamic mapping, NGA, HFR for sports. These services will be backward compatible with deployed UHD devices that comply with the base layer of the Ultra HD Forum guidelines, preserving prior investments. The migration to UHD-2 will happen via UHD-2 production of added value services (classical 2D, field-of-view or viewport style), but with a UHD-1 transmission in the short-term. Of course, UHD-1 mapping to UHD-2 resolution is left to the market to decide, as it has no impact on the upstream processing. Once we have deployed enhanced features of the Ultra HD Forum Guidelines enhanced layer at scale, say by 2022 to coincide with the maturity of the production technology as well on the distribution side (encoder/decoder), we will be ready to handle UHD-2 challenges for early commercial deployment by around 2024 of real UHD-2 services. In the meantime, we see UHD-2 production of added value services feeding UHD-1 devices.

The Ultra HD Forum, as it has always done in the past, will reach out to leading industry groups such as UHD Alliance, 8K Association as well as SDOs such as ATSC, DVB, SMPTE, SCTE, and CTA to share its perspective, starting with the inter SDO meeting at NAB’19.

Other member opinion blogs on 8K: